View our Plan On-Line – Let us Know What you Think! Are you looking for Work? 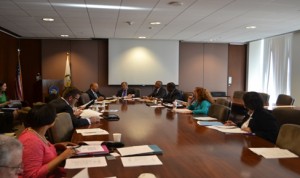 EDAC at May 30 Meeting

The meeting started with Council Chair Howard Males defining the Mission of EDAC and inviting introductions from those in attendance. Mr. Males emphasized President Preckwinkle’s pro-growth economic agenda, and that EDAC work to pursue regional cooperation around economic issues. He referred to the the report “Partnering for Prosperity – An Economic Growth Agenda for Cook County” released on April 4, 2013, by President Preckwinkle and the Council of Economic Advisors.

Herman Brewer, Bureau Chief, Cook County Bureau of Economic Development also made remarks. He spoke about other economic initiatives launched since President Preckwinkle took office. They include: creation of the Land Bank Advisory Council, Chicago-Cook Workforce Partnership, creation of the HOME Consortium, and rethinking Cook County property tax incentives along with developing new ones, and the $30 million HUD 108 Loan Program to name a few.

The Council then decided that due to the amount of work at hand, they would attempt to meet more than quarterly.

The Council also reviewed the application for a Class 7b Property Tax incentive submitted by UGP Schiller Park, LLC for the development of a $19 million parking facility that is slated to create more than 120 temporary and permanent jobs. After comments and review, the application was approved.

Department of Housing and Economic Development

Go to www.cookcountyil.gov/economicdevelopment  for more information about economic development in Cook County.

If you enjoyed this article, please consider sharing it!