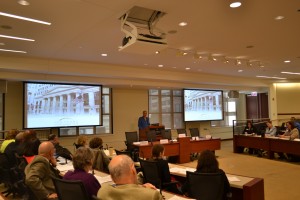 President Preckwinkle speaks at forum on Confronting Suburban Poverty in America, sponsored by the Brookings Institute

Speaking to a full house of suburban service providers, municipal staff, elected officials,  philanthropic and civic organizations, at an event sponsored by the Brookings Institute and the Federal Reserve Bank (FRB) on September 26th, President Preckwinkle offered  her thoughts on an action oriented agenda for regional economic growth.  She also introduced  Elizabeth Kneebone and Alan Berube, authors of the book Confronting Suburban Poverty in America.  The event was organized by BRicK Partners.

Addressing the varied needs of the suburban poor population requires the concerted effort and coordination of government officials, philanthropy, the private sector, and non-profit organizations working both collaboratively and strategically on housing, education, social services, planning and transportation issues.  The event focused on these issues, but the panel Herman Brewer served on looked at how current initiatives could be expanded or changed in order to create a stronger infrastructure for confronting suburban poverty.  The management team from the Bureau of Economic Development were also in attendance.   In addition to showcasing the new Cook County Land Bank, and other initiatives, Brewer discussed the October 24 Launch of the County’s strategic plan, and its plans to coordinate federal resources to better support place-based municipal collaboratives.

The day produced important dialogue and a strong focus on next steps.   Closing remarks were offered by FRB Board Member Terry Mazany, President and Chief Executive Officer, Chicago Community Trust.   Earlier that day, Brewer and his team joined Mazany and more than 20  other funders to discuss their role in addressing the challenges and recommendations surfaced in the book.

Much data related to suburban poverty was discussed. For example, the book makes the case that the region’s suburbs have substantially fewer philanthropic resources than the city, with just $2.28 grant dollars per poor person compared to $68.35 in the City.  To find out more about the book Confronting Suburban Poverty and the data they have compiled, go to their website: www.confrontingsuburbanpoverty.org

If you enjoyed this article, please consider sharing it!